BREXIT: Will we finish the first chapter?

René Defossez, UK economist and Fixed Income strategist gives you his in-depth analysis in this podcast: 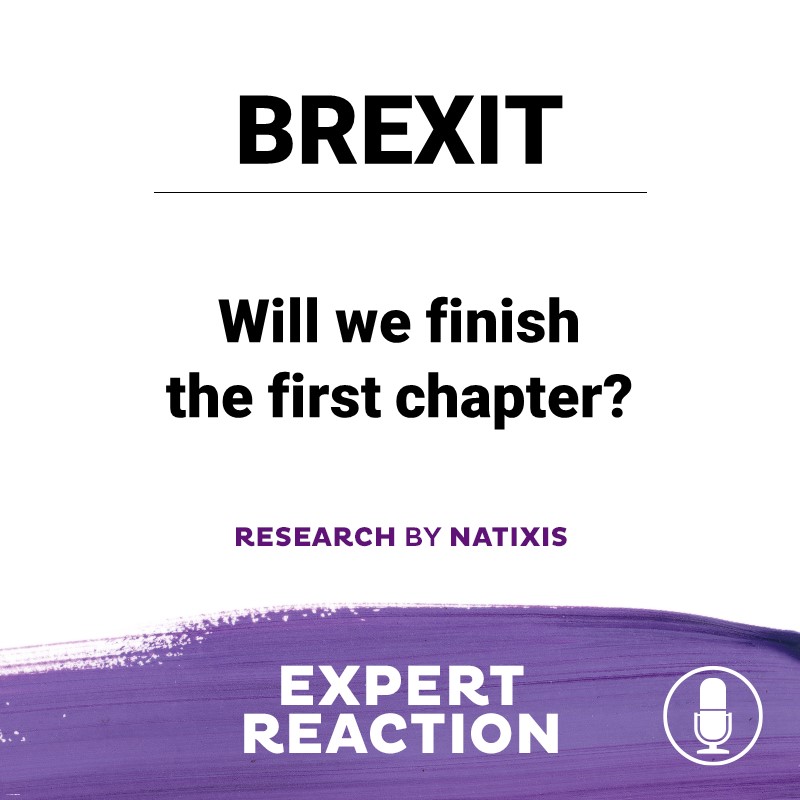 Theresa May agreed a deal with the EU on the terms of the UK’s departure. It included how much money the UK must pay to the EU as a settlement, details of the transition period, the backstop and citizens’ rights.

In September 2019, MPs passed a new law – introduced by Labour’s Hilary Benn – designed to stop Boris Johnson pushing through a no-deal Brexit on 31 October. Mr. Johnson would be required to request a three-month Brexit delay unless he can pass a deal or get MPs to approve a no-deal exit.

Part of an EU treaty that sets out how member countries can leave, with a two-year timetable for leaving. However, the deadline was extended to 31 October 2019 after MPs rejected Mrs May’s Brexit deal.

The backstop was an insurance policy negotiated by former Prime Minister Theresa May, to avoid checks along the Irish border. Boris Johnson, the new prime minister, removed the backstop after renegotiating the withdrawal agreement and replaced it with a new customs plan.

But first, what happened last Saturday?

Parliament voted in favour of Oliver Letwin’s amendment by 322 to 306.

The Letwin amendment is a kind of insurance policy against a no-deal Brexit. According to this amendment, parliament will withhold approval of Johnson’s deal until the withdrawal agreement implementing Brexit has been passed. It will therefore be impossible for Johnson to get approval for his deal on Saturday. He has been obliged, because of the Benn Act, to ask for an extension of Article 50. He wrote 3 letters to the European council, including one, unsigned, asking for an extension to Article 50, and another one, signed, saying that he was opposed to this extension.

What could happen in the coming days?

Starting with today, Jacob Rees-Mogg could attempt to hold another meaningful vote, assuming obviously that the speaker allows it. Otherwise, Johnson could bring forward the Bill on Tuesday, to see whether MPs are ready to back it in principle. If he succeeds, debates on the Brexit Withdrawal Agreement could begin shortly after.
At the same time Donald Tusk will be consulting EU leaders on the question of the extension.
Several EU officials, including Macron, Juncker, Rinne, even Varadkar, have explicitly stated that they don’t favour another extension to Article 50. Others, including Merkel, are much more cautious. Our feeling is that the hawks, on the EU side, want to put as much pressure as possible on Westminster. They want to put an end to phase one of Brexit. But, at the same time, they do not want the UK to leave without a deal.
Boris Johnson has a decent chance of winning. The maths suggests that there is now a slight majority of MPs in favour of this deal. According to some newspapers, a “yes” answer may win with a majority of 5 votes, even if the DUP MPs still oppose this deal. The DUP fears that it could be the first step towards Ireland’s reunification. Remember indeed that the new backstop, which by the way is by no means new (it’s actually the first backstop proposed by the EU, which has been slightly repackaged), implies that there will be a border on the Irish sea, between Great Britain and Northern Ireland.
If Boris Johnson fails to pass his bill, one big question will be whether the EU will grant the UK another extension to Article 50. Despite the comments made by the hawks on the UE side, I think the answer is yes, for a very simple reason which is that no country is really prepared for a no-deal Brexit on 31 October. And in that case, Johnson would be the big loser, and the alternative scenarios, including a new referendum, would become more likely.

Other possibilities to keep in mind: in particular, even before the end of the month, MPs can try to table another referendum, and obviously the EU can refuse to grant the UK an extension of Article 50.

If Westminster votes in favour of Johnson’s deal, this would end chapter 1 of Brexit. But the Brexit saga would not be over. The UK would leave the EU on the 31 October, or a bit later if there is a technical extension, it would enter a transition period which would last until December 2020, and which could be extended by 1 or 2 years. During that transition period, the UK and the EU would negotiate a trade deal, but on average, it takes 6 or 7 years for the EU to strike a deal with a third country. Therefore, there is a decent probability that at the end of the transition period, trade relationships between the UK and the EU would be under WTO rules before, perhaps, eventually being under an FTA+ or ++ arrangement. A lot will depend, obviously, on the UK’s decision regarding regulation. As far as the financial industry is concerned, Mark Carney will leave his current position as Head of the Bank of England by the end of January, and may well be replaced by Andrew Bailey, who is clearly contemplating some divergence between UK and EU regulations. As a result, it could be difficult to strike equivalence arrangements between the UK and the EU.
Snap elections should take place in the near future, whatever the nature of Brexit, because Johnson has no majority in parliament. If Johnson wins next week, Tories could well have an absolute majority at Westminster. If not, one will witness a fragmentation of the political landscape, which would make things even worse. Last but not least, the UK can backpedal at any time during the transition period.

One can hope that Westminster will ratify the withdrawal agreement, but there are many stumbling blocks on the road ahead.