Theresa May has announced that she would resign on June 7. This will trigger a leadership contest. What are the three main consequences to expect from this event?

René Defossez, UK economist and Fixed Income strategist explains you his analysis through this podcast to discover. 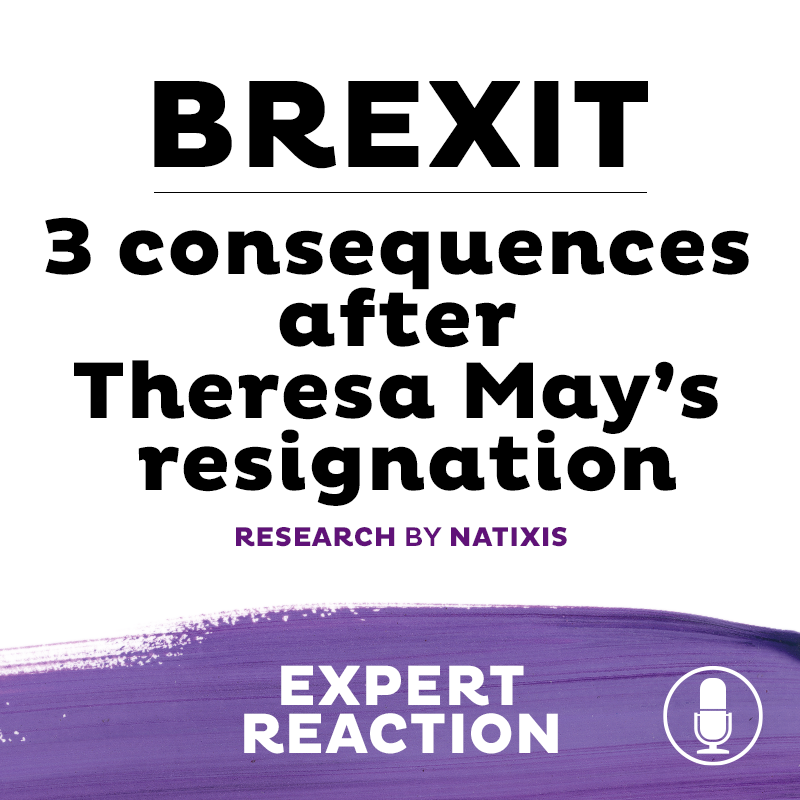 Theresa May has announced that she would resign on June 7. This will trigger a leadership contest. She will remain as a caretaker until a new Prime Minister is elected. This decision, though expected, has many consequences:

Indeed, the next PM is unlikely to submit this text a fourth time to UK MPs. He could obviously try to renegotiate the agreement with the EU27, but Brussels made it clear that the current version is the final one. The only thing which could possibly be modified is the political declaration. But this would not solve the main issue, which is Irish backstop.

2- T. May will probably be replaced by a “Brexiter”.

B. Johnson is seen by many as a possible successor. But there are many other candidates, including Michael Gove, Dominic Raab, Amber Rudd or Jeremy Hunt. The home secretary Sajid Javid is also a candidate. The probability of a hard Brexit will partly depend on the future prime minister. It would be high, if B. Johnson is the winner, lower if Amber Rudd wins, because she is firmly against a no-deal Brexit.

3- Because Theresa May’s resignation decreases the probability of the WA been ratified, it obviously has a significant impact on financial markets.

The sterling is weakening for several days, since it has become clear that T. May will have to step down. It will remain under pressure as long as the probability of a NDB will remain high. UK interest rates are falling, mainly because the BOE is very unlikely to modify its monetary policy in this environment. And the B/sE of UK I/L bonds are heading North, because a falling sterling would fuel inflation, even in a weak economic growth environment.

Theresa May was only a small part of the problem. The main issues were the divisions in Westminster, including within the parties, and the mismatch between direct democracy and parliamentary democracy. These issues cannot be solved by electing a new PM. So it would be very optimistic to expect the current political stalemate to come to an end anytime soon.

So what will happen next? Several scenarios are still possible, including those which would lead to general elections or a second referendum. A new postponement of Brexit day cannot be totally ruled out. But we believe that the probability of a no-deal Brexit end-of-October is now significant. The no-deal Brexit can obviously be managed, via contingency plans and continuity plans, but it would still be a no-deal Brexit. The UK would probably fall into recession, the severity of which would depend on how companies and governments have anticipated the shock. And a recession in the UK would have a very negative impact on EU countries’ economic activity. On top of that, the problem of Irish border would remain unsolved, and one cannot rule out that a referendum would be organized in Northern Ireland, which may well lead to a reunification of Ireland. Scotland could also organize a referendum.

To sum up, Theresa May’s resignation solves nothing. If the UK is heading toward a no-deal Brexit, it would rapidly face a huge economic and even existential risk.