Following the new currency launched by Facebook, namely Libra, many questions arise about pros and cons of this digital money with high potential.

Jean-François Robin, Global Head of Research at Natixis explains you his analysis through this podcast to discover. 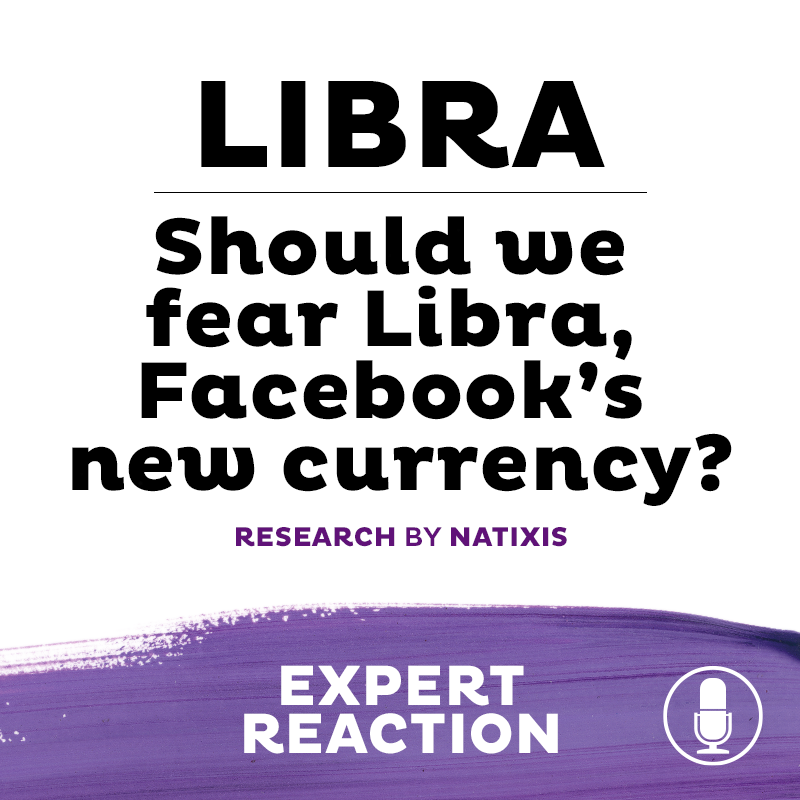 Today’s subject is about the Libra, new currency created by Facebook. What are the pros and cons about this new digital currency launched by Facebook and others?

It is said to be launched in the first part of next year if everything goes as expected according to the plan. This is a bit different compared to bitcoin as it is going to be done with a consortium of private companies so it’s not only Facebook. As well, VISA, Mastercard, Uber, Group Illiad and other digital actors are going to be a part of it. For now, 27 corporate companies have joined Facebook. The plan is to be up to 100 companies in the consortium. Libra is not a public blockchain, it’s a digital currency but which is going to be available on WhatsApp, on Messenger, and other applications of this consortium. The idea is to benefit from the power of the applications to pay and to do payments between users.

The pros of this digital currency

It is a way to do easier and cheaper exchanges of money between countries: for now, on average it is probably costing you a fee of 5% if you want to transfer some money from the US to Africa for instance. With this digital currency, it is going to be much cheaper and easier to do. So, it could be a very positive thing for countries without stable currencies, let’s think about Venezuela for example. If you are living in Venezuela, you can be a bit worried about the value of your portfolio if you own some cash. It’s worth remembering that last year inflation in Venezuela was worth of one million percent, it seems totally unreal. So, it’s probably much better to have some Libra in your portfolio compared to your domestic currency.

Why is that so?

Because Libra is going to be linked to a basket of currencies like the dollar or euro – it is will very similar to the weight of these currencies in the world GDP. In a nutshell, it will very close to a dollar. One Libra could be equal to one value of the basket of 60% of dollar, 40% of euro and so forth. It could be much stable than a bitcoin, which is not a currency per se because it is much too volatile to be considered as a reserve of value. The Libra has learned the lesson and is going to be much more stable than other digital currencies. It can be a way to store value against inflation and it could be very good news for people without banking account. In today’s world, 1.7 billion people don’t have any bank account. It will be much easier to transfer some money with Libra. Nothing new here as we can observe WeChat’s success in China that gains billion of exchanges over the years or in Africa where a lot of payments are done through mobile already. The additional power of Facebook would be instrumental in this case.

It doesn’t have all the electricity consumption problem than is facing bitcoin, which is consuming the equivalent of electricity of a country like Ireland. It is better for the planet in this way.

The cons of Libra: it is not a public money as in bitcoin or other e-currencies

It remains a private association in Switzerland with big players’ consortium. It is not there for free: if within the 10% people without banking accounts 1 out of 2 people are going to put 50 dollars to buy 50 dollars of Libra, every year this consortium of major corporates is going to earn six hundred million of fees.

When you buy Libra, you use dollar or euro for instance with bonds. Facebook is going to earn some yield whereas users will receive nothing out of it. This will lead to the privatization of profits. If on the other way around, the treasuries lose some profits for any kind of reasons then users will lose the value of their investments and profits compared to their initial currency. This currency is systemic, and Facebook is becoming more and more of a bank. That’s why, it would have to be supervised by other banking authorities like the BIA, the Bank of England, etc. The US Congress has already stated they will look more into this currency. Which would be less interesting for the Libra and more expensive at some length.

Another significant risk must be taken into account: you are going to give yourself even more to Facebook than ever

Facebook already knows about your holidays, your friends and now if you want to use Libra, in a way, Facebook could use these pieces of information to know if you are a good consumer or credit profile. They could provide you for instance competitive rates for your credit for you are having good notes in their credit scaling. Data privacy is at stake as we have witnessed the latest Cambridge Analytica scandal.
It’s not new on the market: many banks are turning digital. It is better to have a bit of a control by a public and independent institution than a private corporation.

The pros
Digitalization is rising with less use of cash that could be badly funding dealers, drugs or terrorists’ activities.
The digitalization of money is interesting for many users without banking accounts, as well.

The cons
The use of private data is even more at stake. Facebook must prove its ability in respecting privacy and it’s not done yet.
Libra was the money of the Roman Empire, so we should carefully watch out on its meaning. Facebook must have an agenda here. As usual, it’s a private company making a lot of profits.